The London Fashion Week designer for the winter and fall collection in the United Kingdom, Ada Zandition had gotten her collections all tidied up with a whole new series of interesting clothing. Among the apparels of her presentation that were evident on the runway in the fashion show, visible were a series of clothing designed crisply with the resemblance to that of a bat. The runway show right then was arrayed with a whole lot of formal dresses and cocktail dresses, but primarily featured and highlighted the coats that were structured by the intelligent designer Ada Zandition to resemble the body structure of a bat. With this being said, there had been many elements on her dresses and coats which amused the audience for quite a bit, and the impression and impact brought about were quite a lasting one indeed. 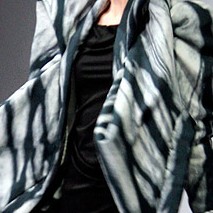 As is visible from above, one of the coats featured in the runway show, it was paired with a true black sleek dress right beneath it, and surely it looked truly unique. The coat featured a near-to-white gray hue all over the entirety, acting as a backdrop, while taking a closer inspection around the coat would reveal how intricate and subtle the other details were atop the dress. Another main feature of this coat was the randomized yet tidy lines that were arrayed right across the coat with a subtle and sleek arrangement. The other details included closely stitched lines that drew interesting distinctions between the colors, but most importantly highlighted the great contrast between both colors on the clothing. The entire piece highlighted true modernity and versatility, especially when accompanied with the underlying sleek black dress.

Right above, lies another dress featured in the runway show of Ada Zandition. The dress is a cocktail dress, but redone with utter complexity and sophistication to look more luxurious and glamorous than any common cocktail dress. Details to the fabric were added on the front portion, and the tones, though falling around the same side of the scale, had subtle differences that complemented each other to bring out the best in the dress. As for the back portion of the dress, it is covered totally in dark tones, sufficient to bring out the beauty of the light blue color at the front portion of the dress.

As for the remaining details of her dresses, when asked by reporters, the UK designer mentioned of the positive environmental effects as well as sustainability of these beautiful apparels. Ada Zandition had gotten her hands into making use of recycled fabric, including recycled fabrics that were used and unused by consumers. Other materials included organic-cotton and more, all of which were not harmful to the environment or nature and were helpful in sustaining the environment. Also, those garments were highly sustainable and were resistant enough for much wearing and tearing. This was a smart step which gave Ada Zandition a better name in the runway show, since it showed her support for the environment and fashion-consciousness. Ada Zandition had definitely been one smart designer who not only creates beautiful apparels, but is also concerned about the environment.