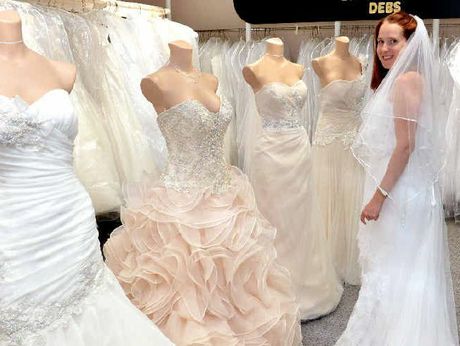 Joanne Mulcahy has her bridal gown fitted by Jocelyn Fairbairn.

NOT sure what to do with that big white dress sitting in your closet?

Have a hankering to wear it again?

Well here is your chance. Past and future brides across the Mackay region are getting dolled up for a good cause, competing in Bride of the Year 2012.

The competition, which raises funds for Angel Flight and Ronald McDonald House, has resulted in Moranbah resident Joanne Mulcahy raising more than $1000 for the cause.

Ms Mulcahy, who got married a couple of years ago, said it was nice to be able to wear her dress again while raising money for a good cause.

The former bride has taken the fundraising side of the competition seriously, holding charity events like bare foot bowls in Moranbah to raise funds.

Jocelyn Fairbairn, of Jill Burston for Brides in Mackay, is helping to organise the event.

“I’ve gone out and chased all the prizes and given entry forms to my brides,” Ms Fairbairn said.

Ms Fairbairn said she wanted to get involved because of the charity.

“It (Angel Flight and the Ronald McDonald House) is important for people in rural areas – they’re just a magic service.”

Ms Fairbairn said more than 50 women had signed up and while most of them were getting married this year a number of them had married a few years ago.

To become a sponsor of the Bride of the Year event or for more information contact Jill Burston for Brides 4951 2747.